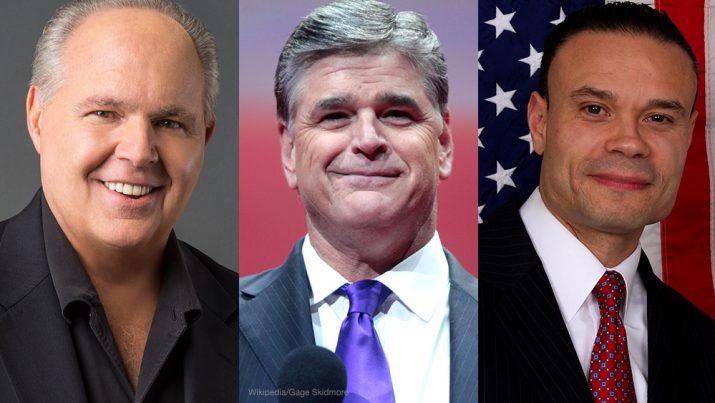 Sean Hannity, Rush Limbaugh and Dan Bongino are all patriotic Americans who love their country. Each of them offers valuable analysis of current events from a conservative / libertarian point of view, but all three are living a huge contradiction in their fragmented advocacy of “free market” health care solutions.

All three of these popular radio hosts are failing to acknowledge the fact that the pharma-dominated health care system is a drug cartel monopoly enforced by a corrupt FDA and criminally-run federal government. The entire health care system as we know it today is little more than a government-coerced monopoly that criminalizes holistic medicine and natural medicinal interventions which are safer, cheaper and vastly more effective than chemical medications.

You know why Illinois is bankrupt? It’s largely because of prescription drug costs and Medicaid payouts to all the medical drug pushers who financially benefit from the government-enforced drug monopoly. (See my article on why Big Pharma’s failed medical monopoly must be broken in order for America to financially survive.) Illinois is paying out over half a billion dollars a month to Medicaid service providers that largely consist of prescription drug-related enterprises. Yet this $500+ million a month didn’t make anyone healthier in Illinois. Not a single case of cancer was cured by Big Pharma’s chemotherapy drugs for the simple reason that chemotherapy causes cancer to spread. Yes, the cancer treatments actually promote repeat cancer, which results in repeat business for the cancer industry that’s bankrupting this nation.

Limbaugh, Hannity and Bongino: WAKE UP and start supporting real “free market” solutions that restore health freedom to the people

My message to Limbaugh, Hannity and Bongino is simply this: You can’t credibly talk about “free market” health care solutions — as Hannity often does — when all you’re pushing is the monopoly pharma system while giving people the “freedom” to buy into the drug monopoly across state lines. That’s no free market… it’s a medical cartel.

Until you come to recognize that all Americans are living in a fascist medical police state enforced by a corrupt bureaucracy, you are not living in the real world. Rush Limbaugh refers to himself as “the Mayor of Realville,” but he lives in total denial that the drug companies use all their power and influence to keep people sick so that drug profits can keep rolling in. Even by Rush’s own logic, corporations are in business to make more money, and if you’re in the medication business, the only way you make more money is by keeping people sick so that they need ongoing “treatment” for life.

Just as Apple is in the business of making iPhones and wants more people to buy iPhones, Big Pharma is in the business of selling medications and obviously wants more people to need medication. How do you accomplish that? By making sure your medication products never actually prevent or cure anything. Repeat “treatment” with toxic drugs that cause more disease is the entire business model of the pharmaceutical industrial complex. It then uses its revenues to engage in felony criminal conspiracy operations including the bribery of over 40,000 U.S. doctors, just one of many crimes that has been publicly admitted to by the pharmaceutical drug industry.

Sean Hannity rightfully rips into the media monopoly of the left-wing media but totally fails to see the medical monopoly that’s far larger and far more dangerous. Hannity somehow thinks that health care costs will magically shrink if people are allowed to buy into more Big Pharma monopoly insurance plans across state lines. It’s absurd! You can’t lower health care costs by any meaningful measure unless you end the pharma drug cartel that has a stranglehold on this nation, having turned America into a “pharma state.”

Dan Bongino is a thoughtful, outspoken talk show host with a refreshing take on most topics — click here to listen to his show — but he so far fails to see the pharmaceutical monopoly that has brought America’s “sick care system” to its knees. It’s astonishing how people like Bongino can think of themselves as free market advocates yet totally fail to see the outright medical monopoly that’s operating right in front of their noses. Note to Dan: It’s not “free enterprise” when the FDA has criminalized all the competition, see?

Anyone who is a true libertarian should be, as they say, “pro choice on everything,” meaning you should support food freedom, health freedom, economic freedom, cultural freedom and more. Yet we are all living under a medical tyranny in this country, where holistic, pioneering doctors who know how to cure cancer are thrown in prison. Just recently, an Amish farmer was sentenced to six years in prison for growing herbs and selling an anti-cancer skin salve!

Are you telling me this is a “free market” for health care? Not a chance. This is a tyrannical medical police state, and its sole purpose is to prop up the profits of a corrupt, criminal dug cartel known as “Big Pharma.”

If you want to know the best radio host who understands liberty, health freedom and natural medicine, look no further than Robert Scott Bell. He nails it on all the issues!